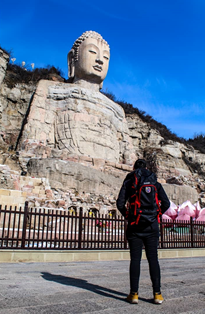 Scrolling through the deepest memories of the Eastern World.

After two years of intense and beloved study, that moment arrived, the Study Year Abroad.

I said to myself: “The story will change, at least for a while, a few days, months or maybe a whole year, that red colour which will illuminate this intermittent experience, will be the same which will set my heart on fire.” And in that thought, I understood that travelling makes you discover the essence of life, it makes you understand that your freedom begins when that of another person ends. Every journey you live it three times: when you dream it, when you live it and when you remember it because travelling to discover new countries leads you to find the continent in yourself.

During my time in China, I have experienced things I thought, in my life, I would never have. I remember an afternoon, walking on the Chinese Wall, shortly after finding a spot from where to capture unforgettable moments, and my partner approached me with a trivial question, inviting me to think about that magical place with an incredible view. I replied with happiness, stating we were on one of the Seven Wonders of the World. At that moment I looked down and saw a ring. That day I got engaged, that day was the Eighth Wonder of the World.

During the winter vacations, a was travelling across multiple provinces and cities, to discover China’s culture, traditions, local foods and all those places, those things hidden by the thousands of tourists wandering in these eastern lands. But then, all of a sudden, things changed. And there I was, in the city of 西安 Xi’an, in Shaanxi Province, after having left Taiyuan, in Shanxi Province, approximately 7 hours by car away. I just had a Rou Jia Mo (肉夹馍), “meat in a bun”, for breakfast, and in the meantime, I was scrolling a few articles from the local newspaper. They were stating a severe flue was sickening people in one of the near provinces I intended to visit. I kept scrolling and refreshing the real-time news, and articles kept coming. The flue had a name, and details of the infection, and soon it became a virus.

After having visited the Terracotta Army with a big smile on my face, a call came in. The Chinese University advised me not to visit crowded places, markets, supermarkets where meat made products and eggs are displayed. The University also told me the virus had already reached Beijing. The city was running out of protective masks, all of which quickly sold out.

So I asked myself: wherein China can I ever find an empty place? Thousands of people everywhere, people who travel with dead chickens in empty paint buckets, those who sleep on the ground, those who spit and those who sniff. It is normal for them, maybe not for us. Different cultures, traditions and behaviours. Which places do not sell meat made products and eggs? When I ordered a vegetarian dish, it always came with a few pieces of meat, because as the Chinese chefs say: it ‘gives flavour’.

Reluctantly I felt compelled to finish the trip earlier than expected. I picked up my phone and contacted my University in England to ask if I could continue my studies in Europe. Unfortunately at that stage, they refused: “The national health system has not yet reported enough cases to call students back”.

I saw the situation degenerate in a few hours. I was about to take a train to go to Chengdu, the city of the Pandas when I was told to avoid contact with live animals. In the last ten minutes, I changed the ticket. Then I sat down waiting for the train back to Beijing, and I thought: “It is easy for the plans to change, but it is not easy for us to change what we have planned for so long”. The anxiety went up. Fear, together with sadness, anger, and joy, are fundamental emotions of living beings: it warns us of dangers and pushes us to survival. Sometimes these emotions push us to do something unimaginable, in other times they lead us to take the most obvious path. And in my case, it was the one to go back home.

While I was on the train back to my University Campus, I bought two flight tickets for the day after. Beijing – Dubai, Dubai – Catania. In the airport, I have been subjected to thorough checks, from fever to stains of blood in the masks. At that time, the “coronavirus medical test” was just a theory. After 15 hours, I was back in Italy.

At the beginning of February, the virus reached Europe already. The number of cases was not that high, and people were able to travel with no conditions. So, I decided to move to Lithuania with my partner. A few weeks there passed by, and half of the European countries were in lockdown, my studies cut off. But then the days and months went through, the online classes broadcasting from China started. And in those feelings of distance, I found that red colour I loved, coming from the Lithuanian summer sunset, giving me a sense of warm comfort and the bad feelings slowly fade away. Is it this a usual Study Year Abroad? An exceptional, unthought experience, which made real memories unforgettable.